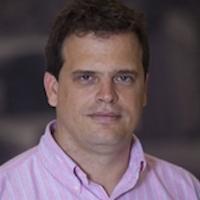 Alexandre is a Research Staff Member in the Natural Resources Solutions group at IBM Research – Brazil. He joined IBM in December 2012.

Alexandre is also adjunct professor at the Applied Mathematics School of Getulio Vargas Foundation (EMAp/FGV). He was also a lecturer at PUC-Rio. Alexandre has taught many graduate and undergraduate courses: logics, data structures, programming, formal languages and automata theory. During his Ph.D., Alexandre was international fellow at Microsoft Research and SRI International. At MSR, in 2008, he worked with the Z3 SMT Solver team (Leonardo de Moura and Nikolaj Bjørner) developing a distributed environment for testing and optimizations of Z3. At SRI International, in 2009, he worked under supervision of Natarajan Shankar in different research projects.

At FGV, Alexandre worked for more than 21 years. He began as an IT staff at EPGE, after complete his Ph.D., joined the EMAp team as adjunct professor. Besides all the experience as programmer, software architect and manager, as a researcher, Alexandre participated in several research projects like: MIST (using natural language processing and description logics for Knowledge modeling), ANUBIS (database consistency check) and Ontology and Context (investigating the problem of ontology alignment).

Alexandre is the author/co-author of more than 60 papers published in peer-reviewed journals and international conferences. His areas of expertise are logics, proof theory, knowledge representation and reasoning, natural language processing and category theory. During his PhD, he proposed new deduction systems for description logics under supervision of Edward Hermann Haeusler. Springer published his thesis titled “A proof theory for Description Logics” in 2012 as a book of the series Springer Briefs.